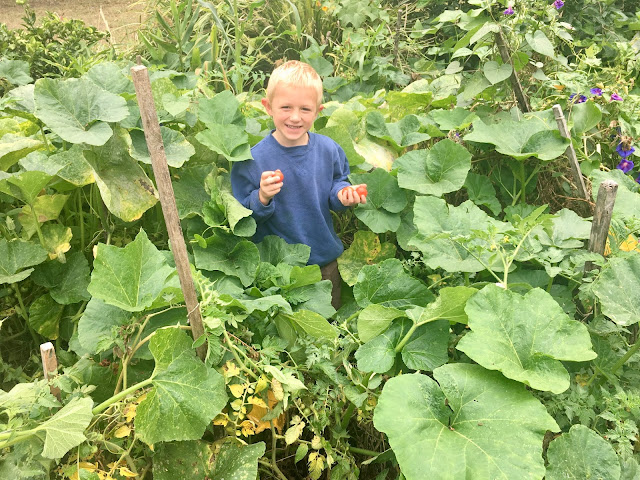 My November garden is a chaos and I’m blaming it all on the pumpkins.
Somehow I missed pulling out an emerging pumpkin seedling (or two), I mistook them for the rockmelon that I actually planted there, marked with a stick for exactly this reason...
We had a bit of rain and the rest is history, there are pumpkin vines everywhere...
Keeping them off the path, out of the fruit trees and pond is a daily job.
Those pumpkins better be bloody delicious! 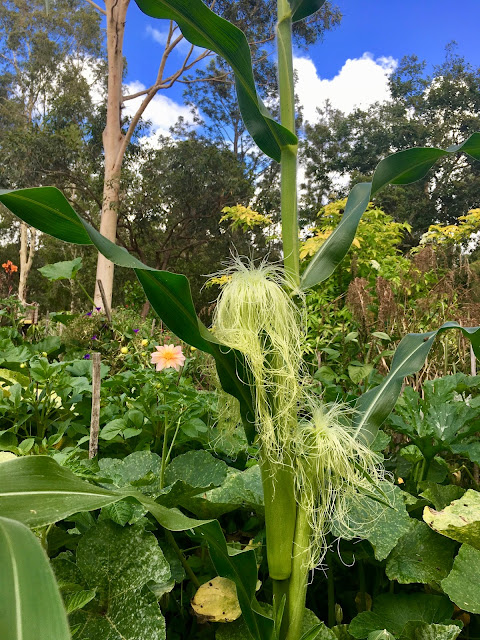 But the corn is poking through it all,
not sure if there is enough to get it pollinate though. 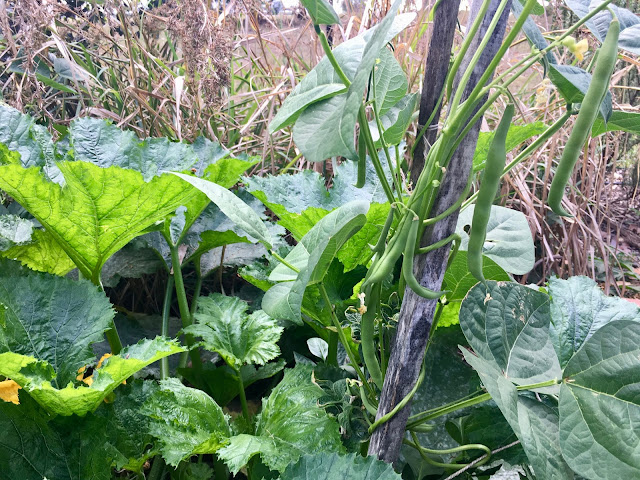 The beans are popping up everywhere as well.
And aren’t fazed by the zucchini plants. Five plants was a bit much to put in.
Who needs eight zucchinis a week? 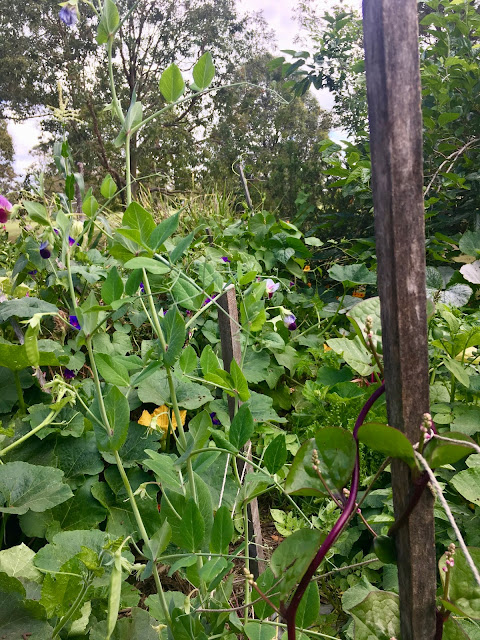 The weather is still mild, as long as it stays under the 35 degrees, the peas will keep doing their thing 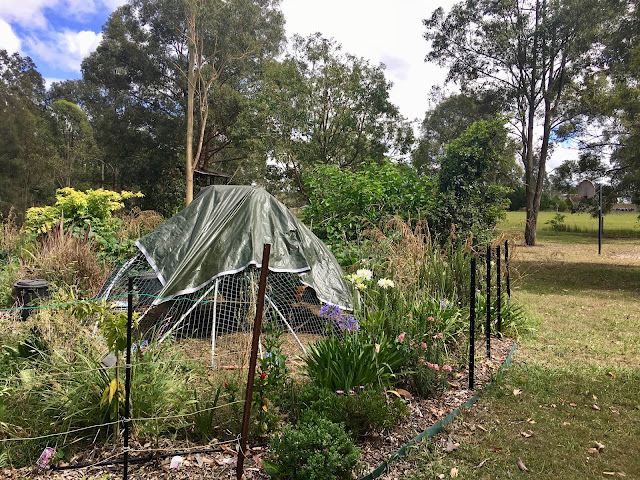 Chooks are doing good too.
Six eggs a day keep us very well provided in the kitchen.

Cabbages, spinach and the kale have survived the attack of the cabbage moth (without any sprays).
The cabbages will end up as sauerkraut. From the rest we keep picking the outer leaves, making them last for a year easily. And they team up well with the eggs, for quiches. 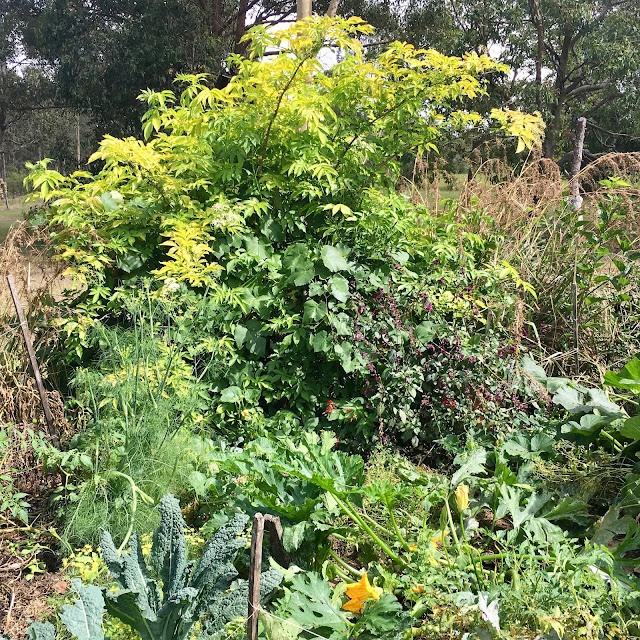 Like I said, chaos.
The elderberry is keeping the grape vine upright, which then gives shade for the ginger, asparagus and my salad violets. The salvias and lemon grass are providing a windbreak for the young mulberry and chillies. And any space left is taken up by the rambling cucumber vines and zucchini.
Space well. 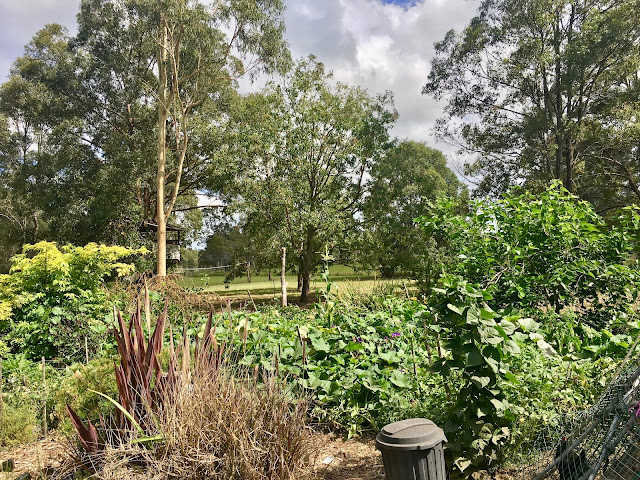 Beans, pumpkins, choko, silverbeet, zucchini, tomatoes, beetroot, melons, lettuce and cucumbers are battling it out between each other.
I just have to chuck a child in, (fully clothed for a change), to find the harvest,
And a bowl of tomatoes every day! 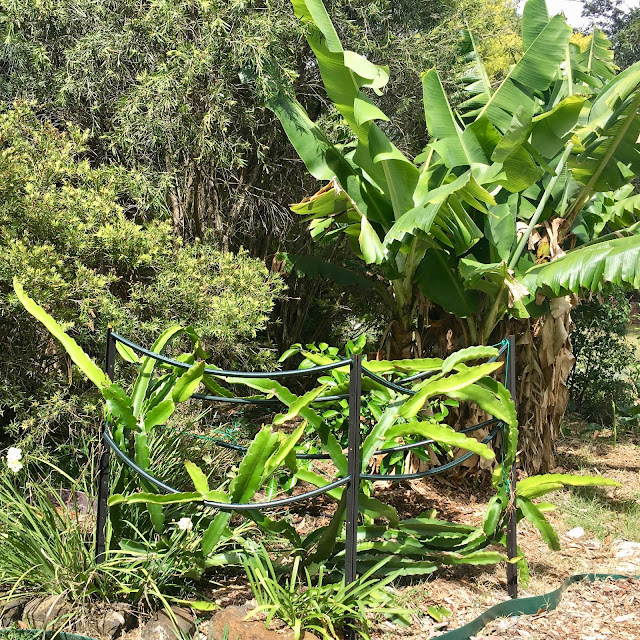 The dragon fruit has decided to grow after all.
Having grown a full meter in the last couple of months, the frame can already do with an upgrade.
Bananas haven’t decided to show just yet. The kids have started to sing songs for them. 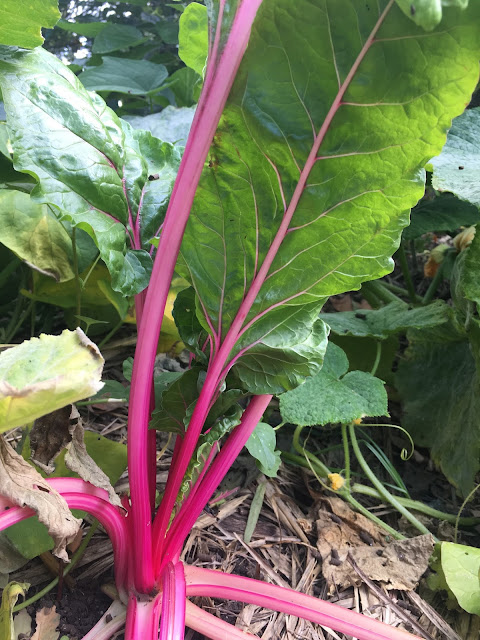 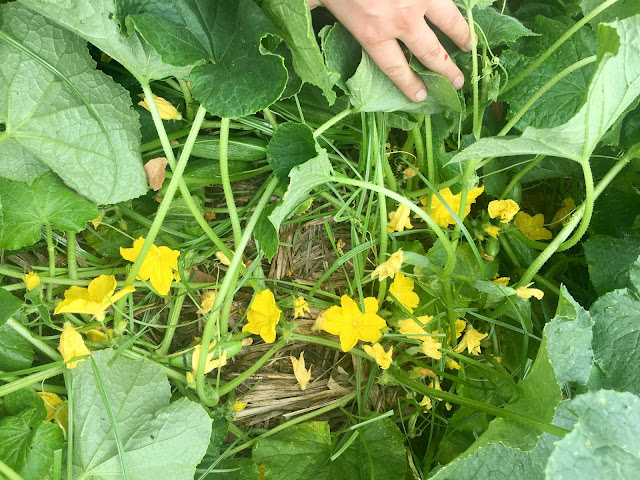 The cucumbers are going crazy this year, the mild temperature (25-30 degrees) is keeping us in 30 cucumbers a week!!!
And going by the flowers, we still have many more weeks to go...

Email ThisBlogThis!Share to TwitterShare to FacebookShare to Pinterest
Labels: Gardening