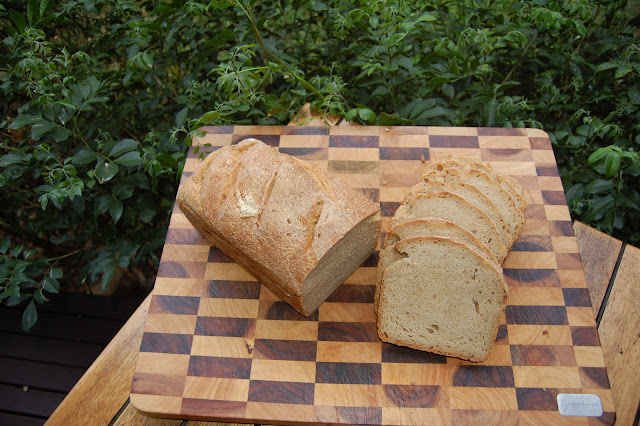 We are a family that love their bread, between breakfast and lunch boxes, a large loaf of bread is gone by the end of the day.
Buying bread at the baker or supermarket, for us, would be a never ending trip into town, or a massive chest freezer. For the last 8 years I've been baking our own bread, I started out with bread mix and yeast, but for the last year I've been only baking old fashioned sourdough bread.

Many people are surprised where I find the time to make bread every day. Sorry to burst your bubble, but well, it’s actually not so hard or time consuming. For me, a daily trip to the bakery would be a lot harder!
When using a bread maker, it does most of the work. Kneading by hand would be nice, but it's so messy, too messy to do every day.
For a yeast bread, especially when using a bread mix, it comes down to: weighing the mix, then adding water and a teaspoon of yeast. Press the start button and 3 hours later you have a kitchen filled with the beautiful scent of freshly baked bread.
My bread maker has a delayed start function, so you could even time it that you would come home in the evening, or roll out of bed in the morning with freshly baked bread. How easy is that?!?!

Three years ago I started experimenting with sourdough, I must say after the first loaf of bread I was sold, slow rise does something wonderful with the texture and taste, but also making the bread easier to digest.
It is possible to program your bread maker for a sourdough loaf, but our loafs have become so large that I blew it up...
I’ve invested in a strong stand mixer, for sourdough just as easy. Mix up the dough (6 minutes), then let it rise in the mixing bowl. Once doubled in size in punch it back and transfer it to a bread tin.

Sourdough is just as simple as a yeast bread, it only needs a longer time to rise, much longer.
It doesn't use yeast, but mix of fermenting flour and water. It’s alive!
Now that might sound daunting, it’s just a matter of using some of the starter then replacing it again with equal parts of flour and water. Making sure you keep a continuous supply and that is doesn’t die from starvation or asphyxiation. Like any other living thing, it needs to breathe, a hole in the lid fixes that.

Once you’ve worked out a routine that suits you it's easily done, I would like to share mine.
Rye sourdough bread recipe:
Around 7am around breakfast time, I combine:
1tsp salt,
550ml cold water in Summer, or lukewarm in Winter.
200gr starter,
300gr rye flour (picture above is with wholemeal flour)
250gr bread flour.
That is a very big loaf.
Put all in the mixer to knead, feed the starter (equal parts of water and flour), scrape down the sides of the bowl and let is mix for another couple of minutes. Around 3.30pm the dough has doubled in size, just a quick punch back, then transfer the dough into a bread tin. By the time I start making dinner at 4:30 I preheat the oven on 180degrees and bake the bread in 57 minutes.

Time-wise, it won't take more then twice 5 minutes of actual work. I've found sourdough to be a lot more forgiving then yeast dough, an hour or two late/early, the dough is still fine. Another plus is that the ingredient list is much shorter (no butter, sugar and bread improver) 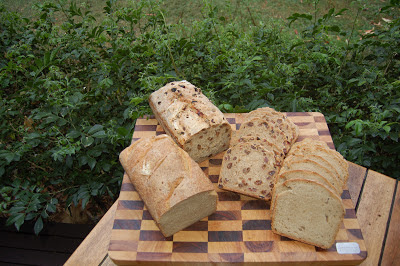 Now, some tips, tricks and ideas:
- Baking your bread in the evening makes sure it has cooled down and is ready to slice in the morning.
- This recipe is for a quick and simple routine in your weekday, I do make my pretty breads in the weekends when I have more time. Baking it freestyle on a baking stone, scoring the dough and a sprinkling of flour for the wow effect.
- Add some sultanas and cinnamon for a fruit loaf, mashed pumpkin with cumin seeds or just a mixture of seeds (pepitas, sunflower, sesame,...) for a change.
- Use bread flour instead of plain flour. The same flour, the grain only has a higher gluten content that you'll need when baking bread.
- Wholemeal flour that you'll find in the supermarket is a processed white flour with bran added, hence the flakes in your bread. I'm using an organic stone-milled wholemeal flour, the whole grain gets used, it makes a beautiful texture bread, light brown with a nutty flavour.
- I buy my flours in bulk (5kg bags). Keep your flours in the fridge or freezer, especially the organic ones.
- Warm weather or warm water in your dough will make it rise quicker. This can work in your advantage, on days that I know I'll be home later I use cold water, cold starter and a cold place to rise. It will even rise in the fridge, just very slowly.
- The starter, where do you start? You can make your own like I’ve done it (it takes about a week to have it fermenting and ready to use), order one online or ask a fellow baker for a little of theirs.
- I keep my starter in the fridge, it’s like a pet and needs feeding. But you can holiday proof your sourdough, mine has survived an absence of three weeks. Tip most of your state out of the container, then feed the tiny bit left with as much as can fit in your storage container. Keep it in the coldest part of the fridge.
- A link for recipes and detailed steps to make your starter and breads: (link)
- Many people are of the opinion that bread is bad for you, well maybe. We do live in a society that loves their heavily processed grains and starches. I've never been a fan of white bread, let alone the mass produced supermarket breads. It doesn't fill you up, the topping will and not for long. A good bread made with whole grains will, but they are hard to find and expensive, but you'll eat less. Slow rising breads are healthier, tastier and easier to digest, for more info: (link)