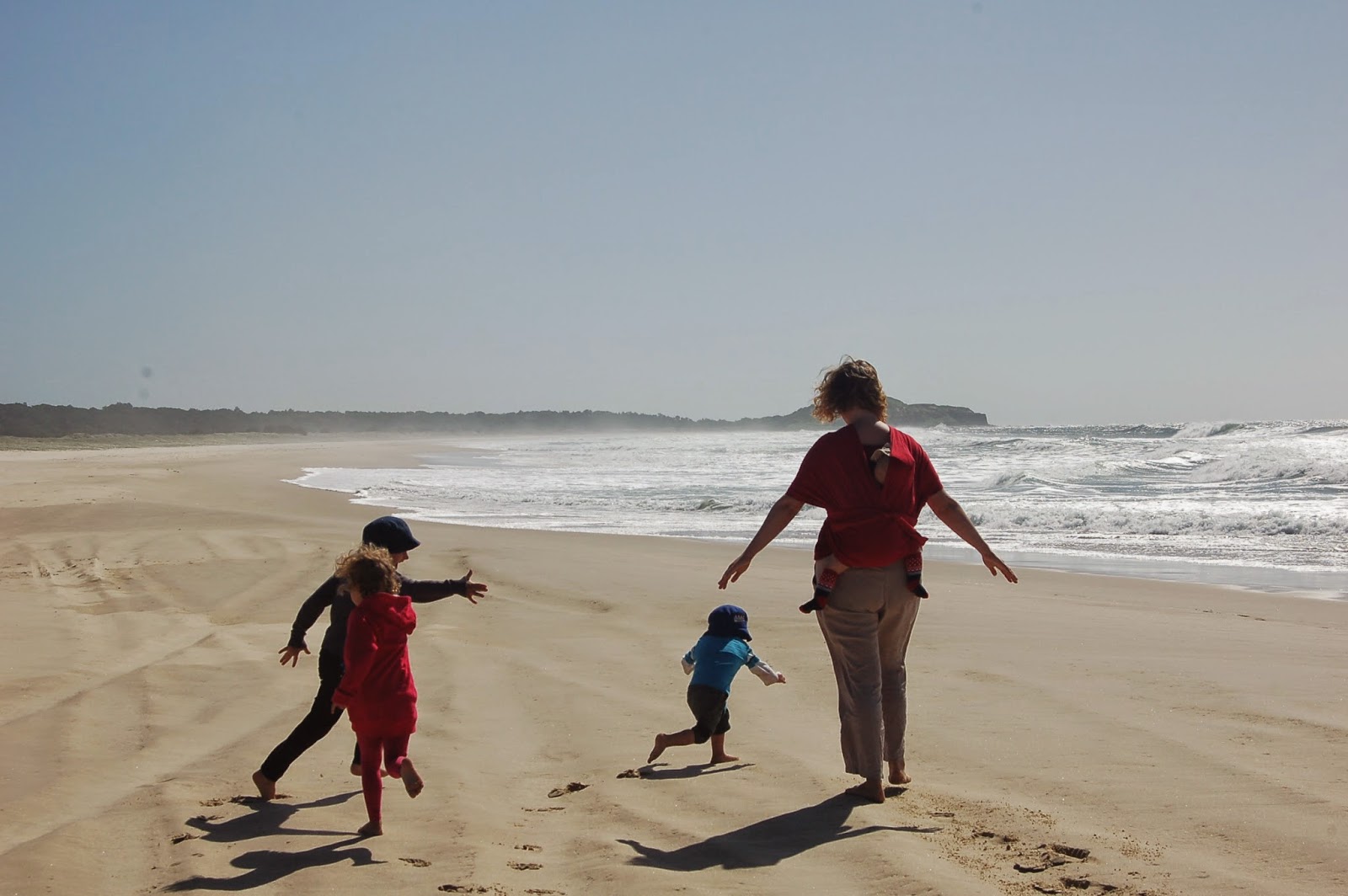 In a pocket of rainforest, along the coast of The Northern Rivers in the Bundjalung National Park lays a camping ground, Woody Head. Our favourite place to pitch our tent during the Easter (or any other) school holiday. And we don’t have far to go, this is almost in our back yard!
For the first time we took two weeks, making it possible to truly wind down before it was time to pack up again. The first weekend being Easter, we (traditionally) had lots of rain. Our poor 9 year old tent didn’t cope well with the prolonged heavy downpour and after the second day started to drip. Our campsite became one with lake view, to the great amusement of the kids, a huge puddle to stomp around in. Also the perfect weather for the highland festival in the neighbouring town Maclean. 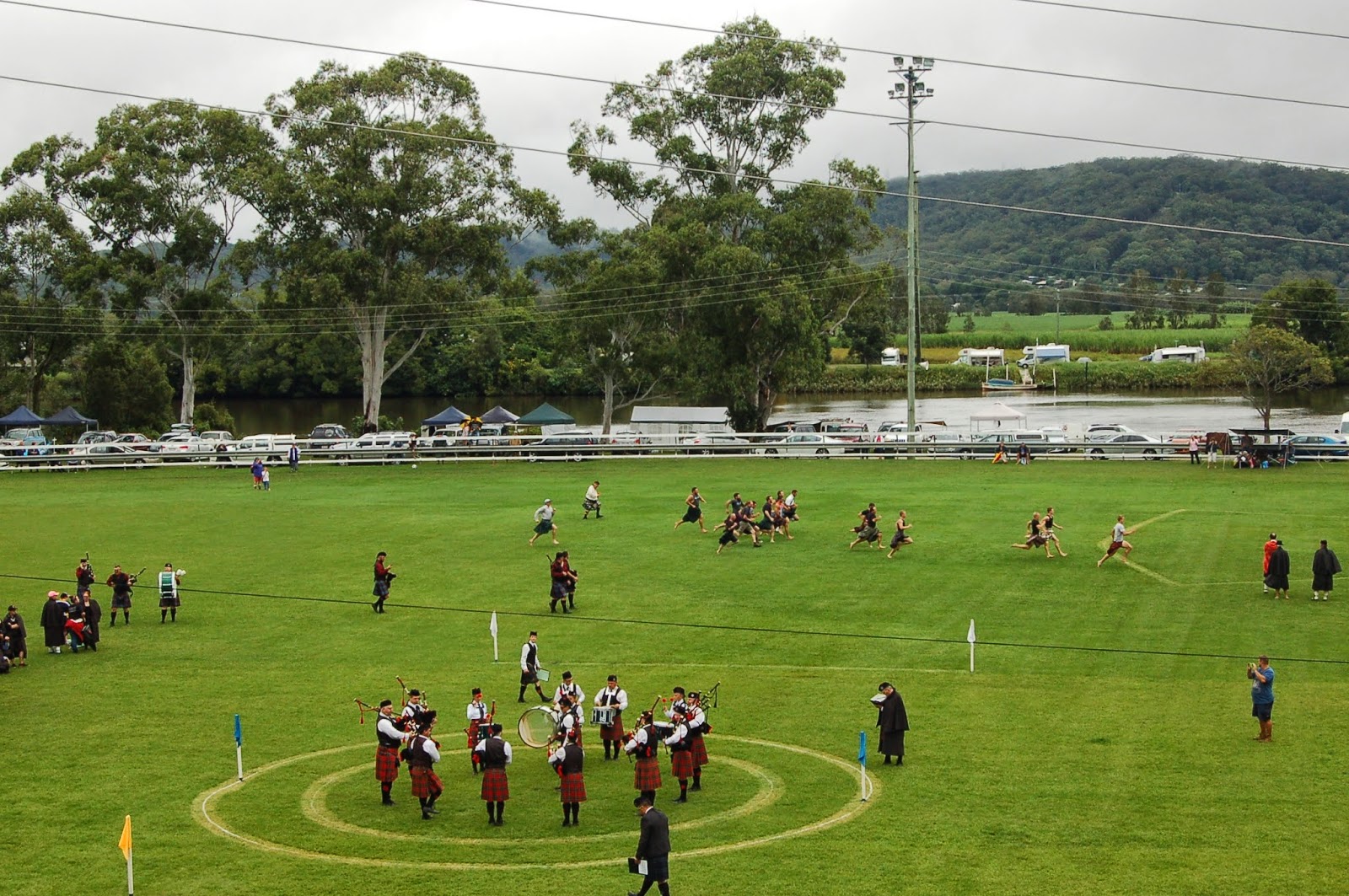 Highland sports and bagpipes, you would almost forget on which continent you were.... 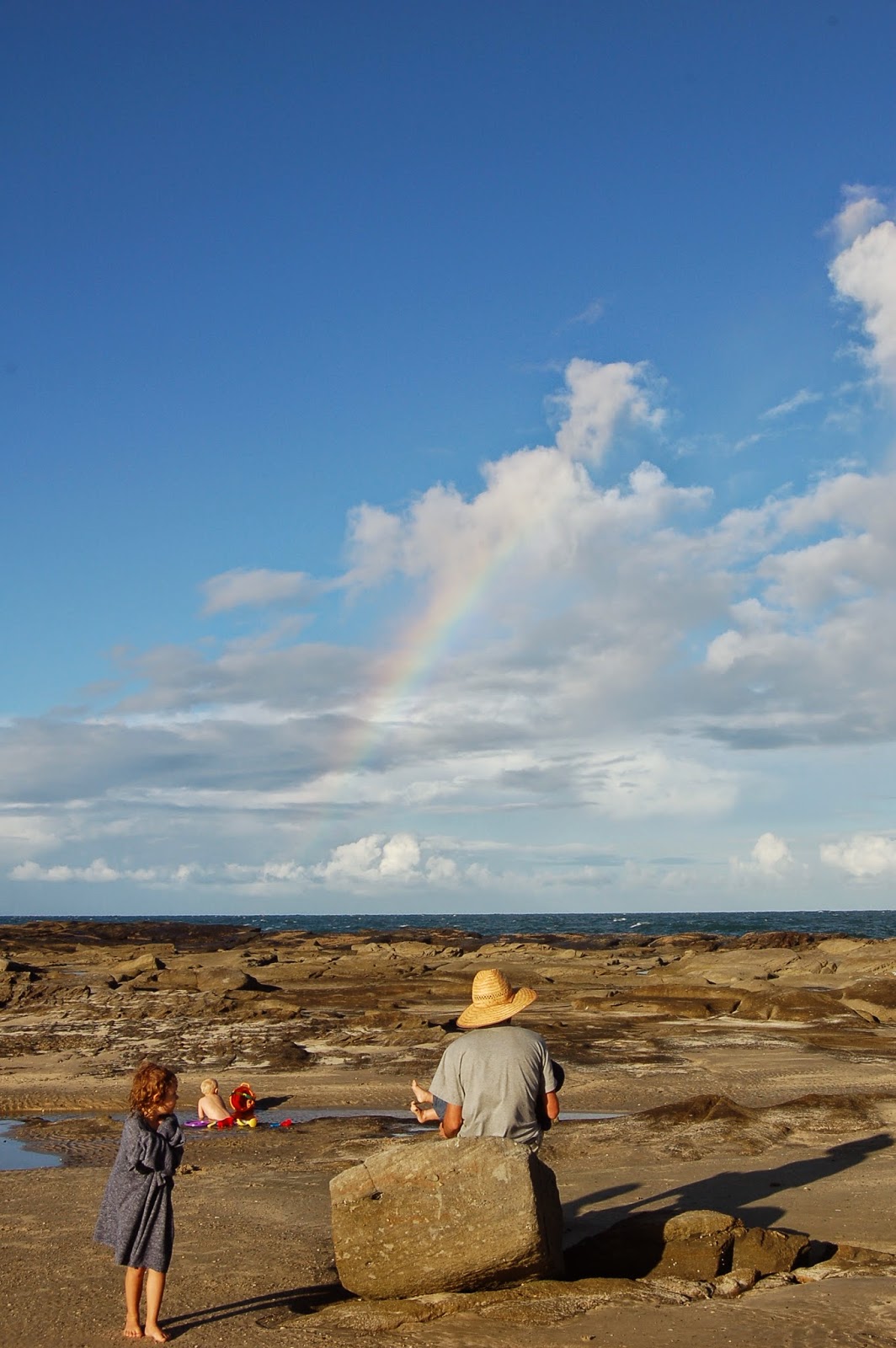 Once Easter was over the sun came through, with gorgeous days for the rest of the holiday. 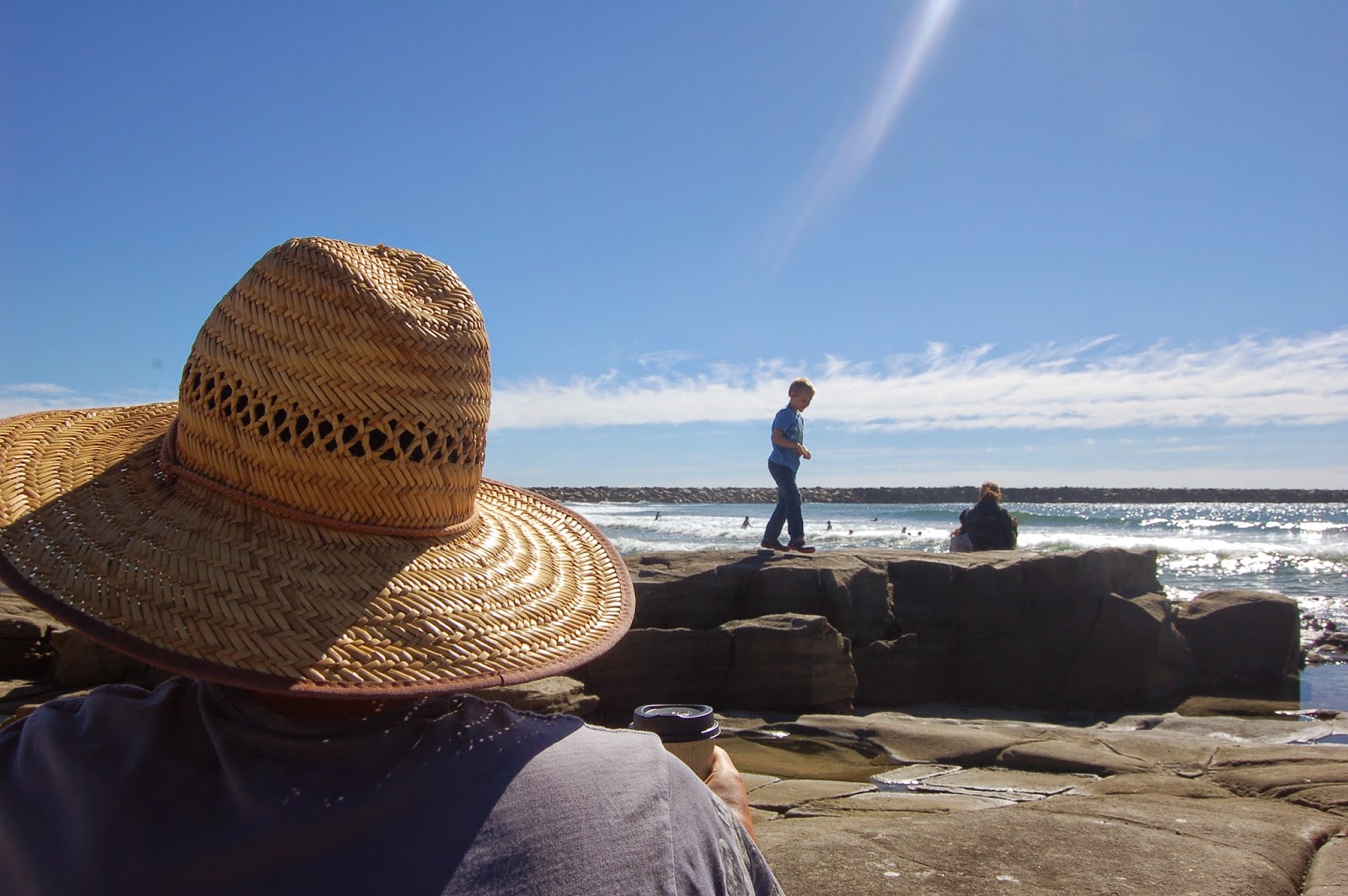 Stocking up on fresh supplies at the Yamba Famers Markets, can’t think for a better location to buy/sell locally grown produce! 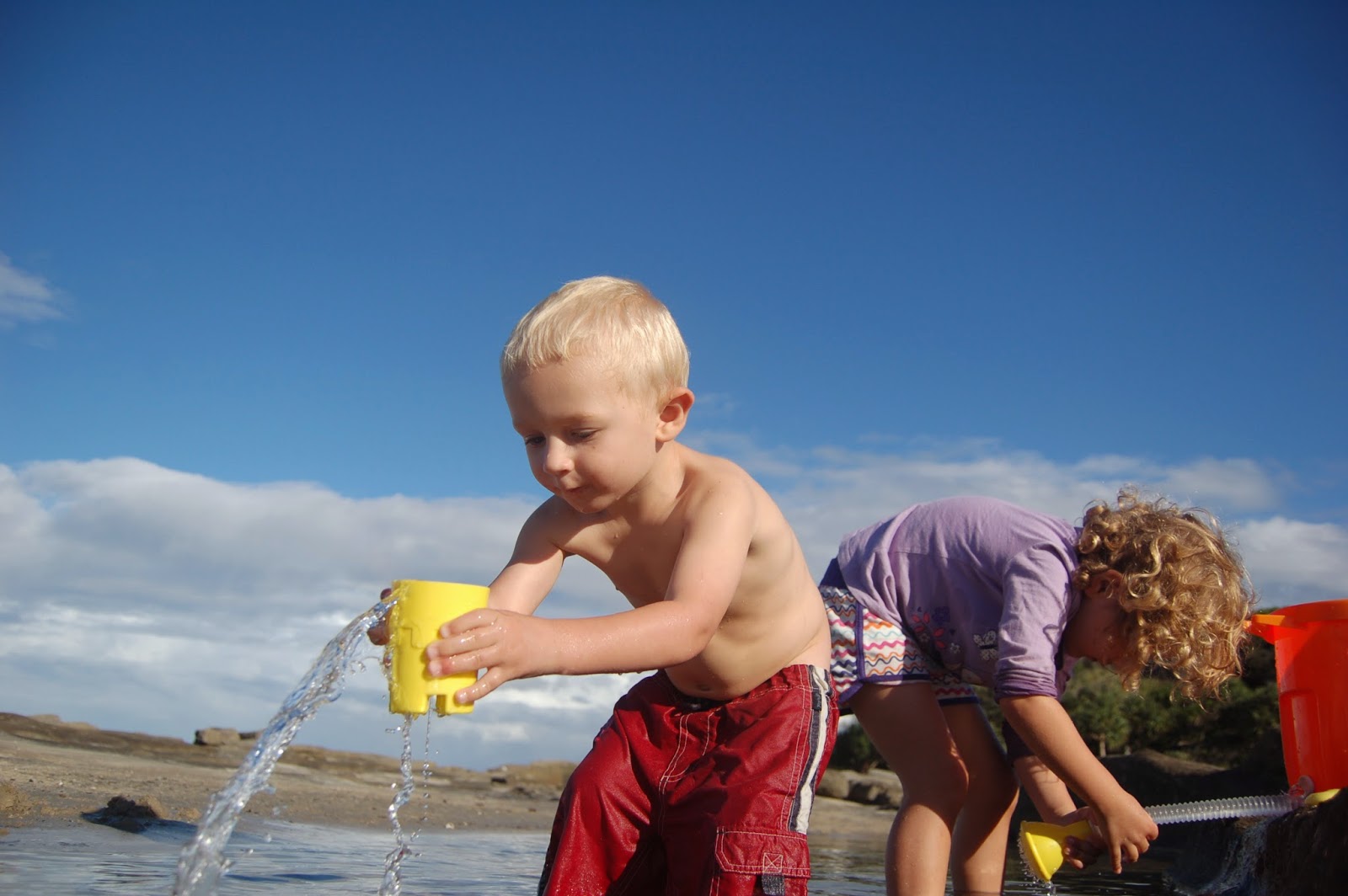 Mornings and afternoons the kids would live along fish and crabs in the rock pools. The rest of the day they would live in trees or on bikes with a pack of friends.
Around 19:00, “Can I please go to bed?”, was an often heard phrase... 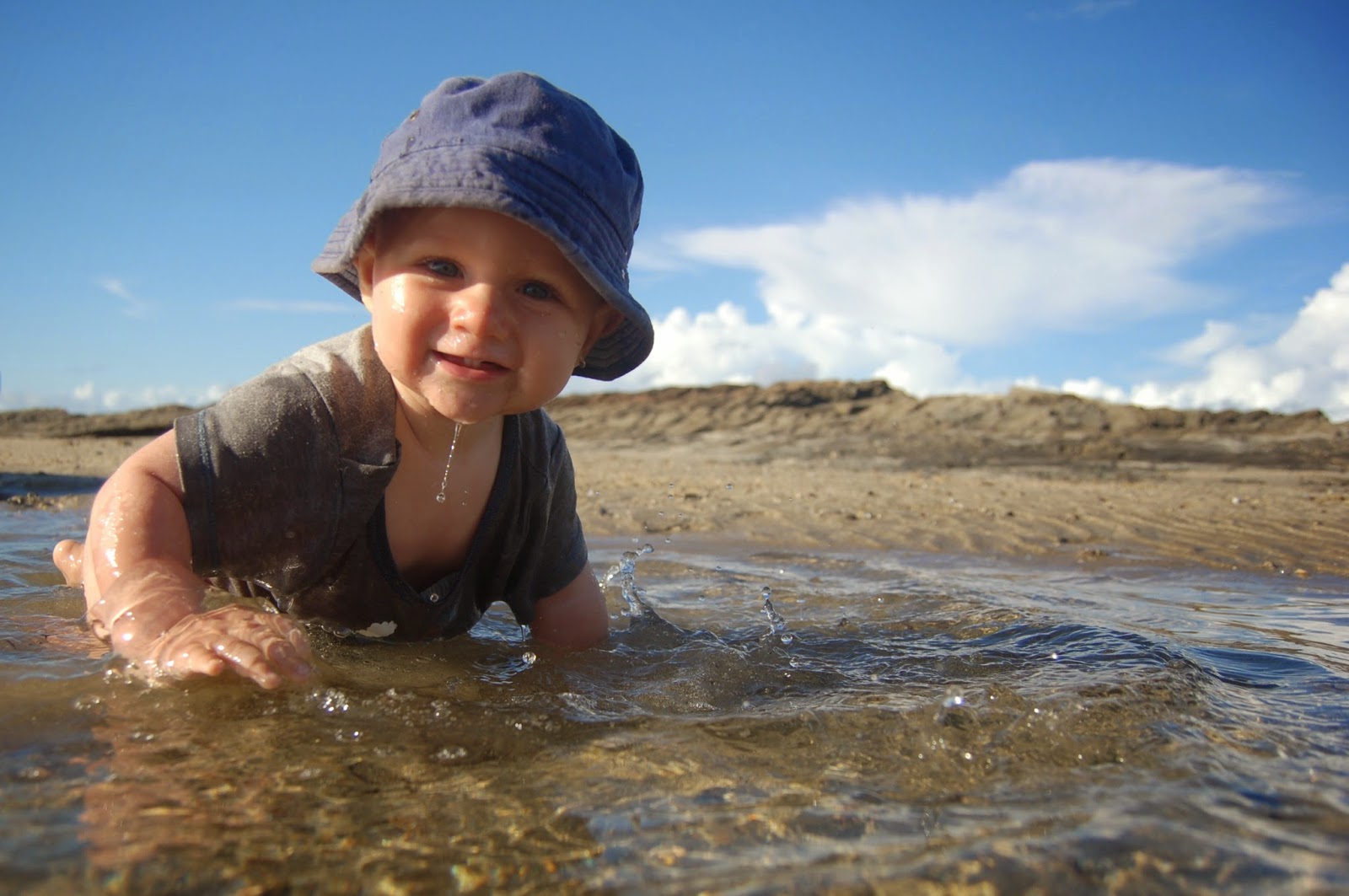 David making turtle tracks on the beach, another water baby, crawling a determined 30+ meters for a play in the waves. 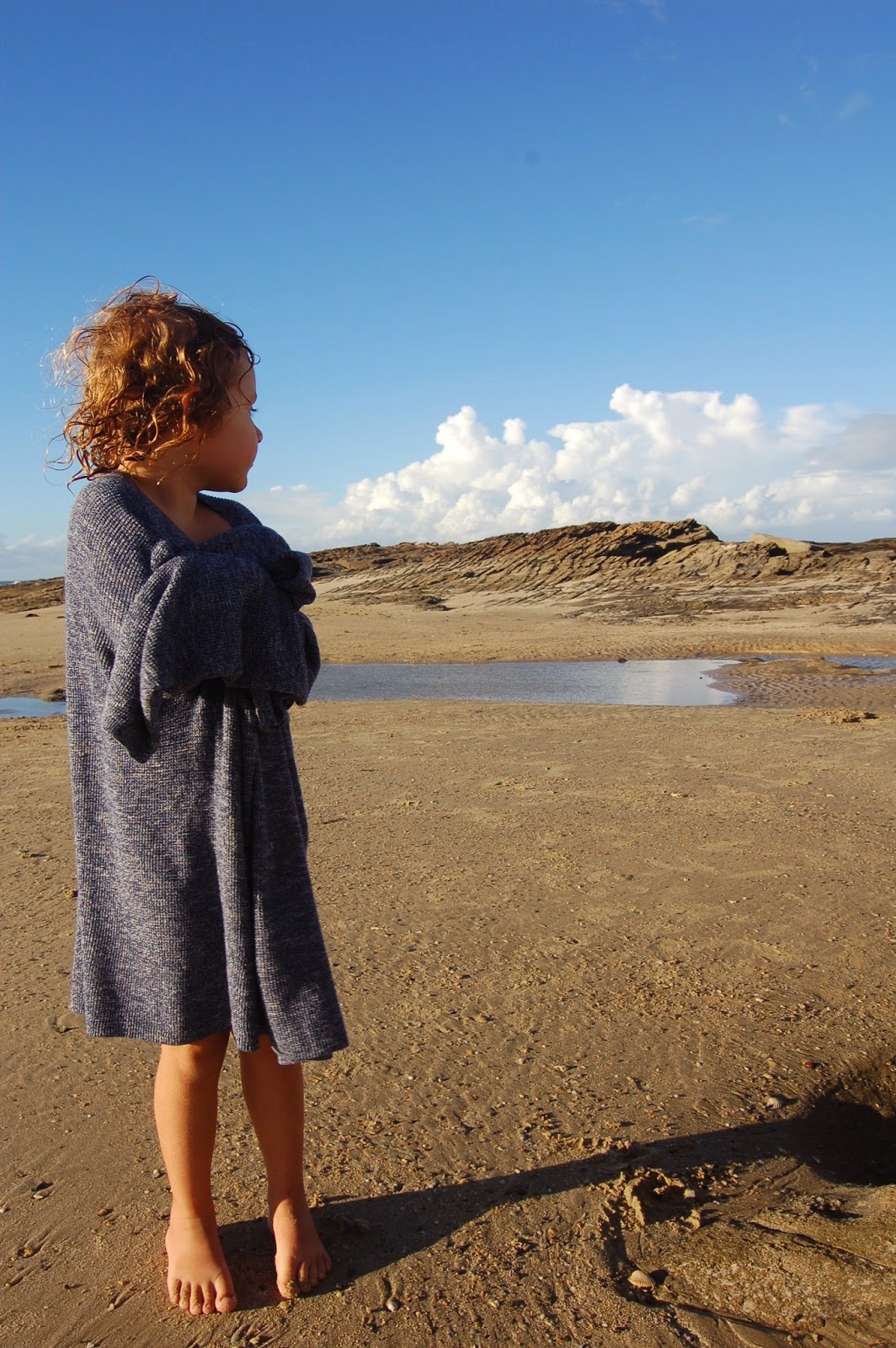 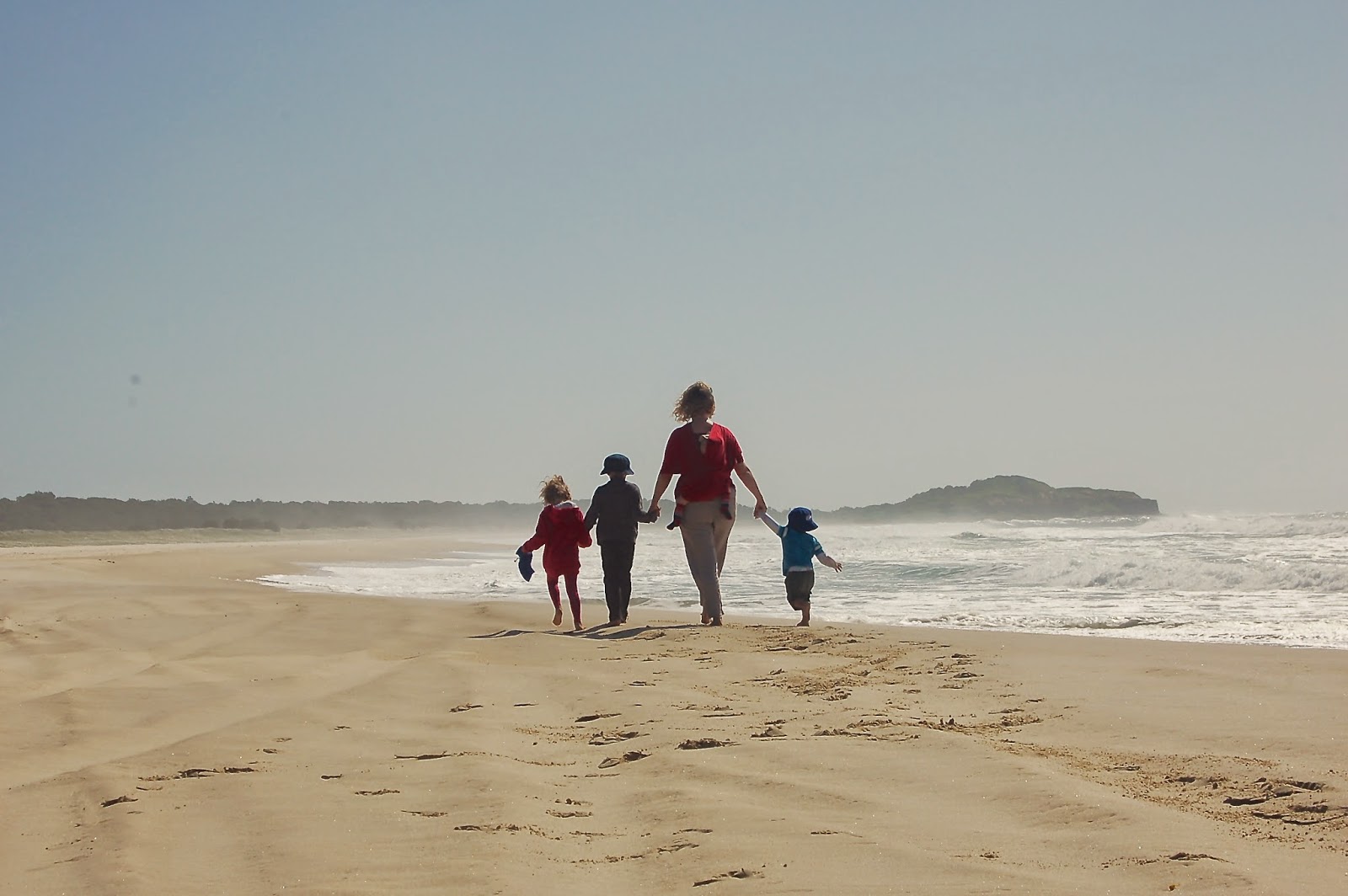 Going for a walk on Iluka Beach, with the wind howling you could feel the first sting of Autumn. 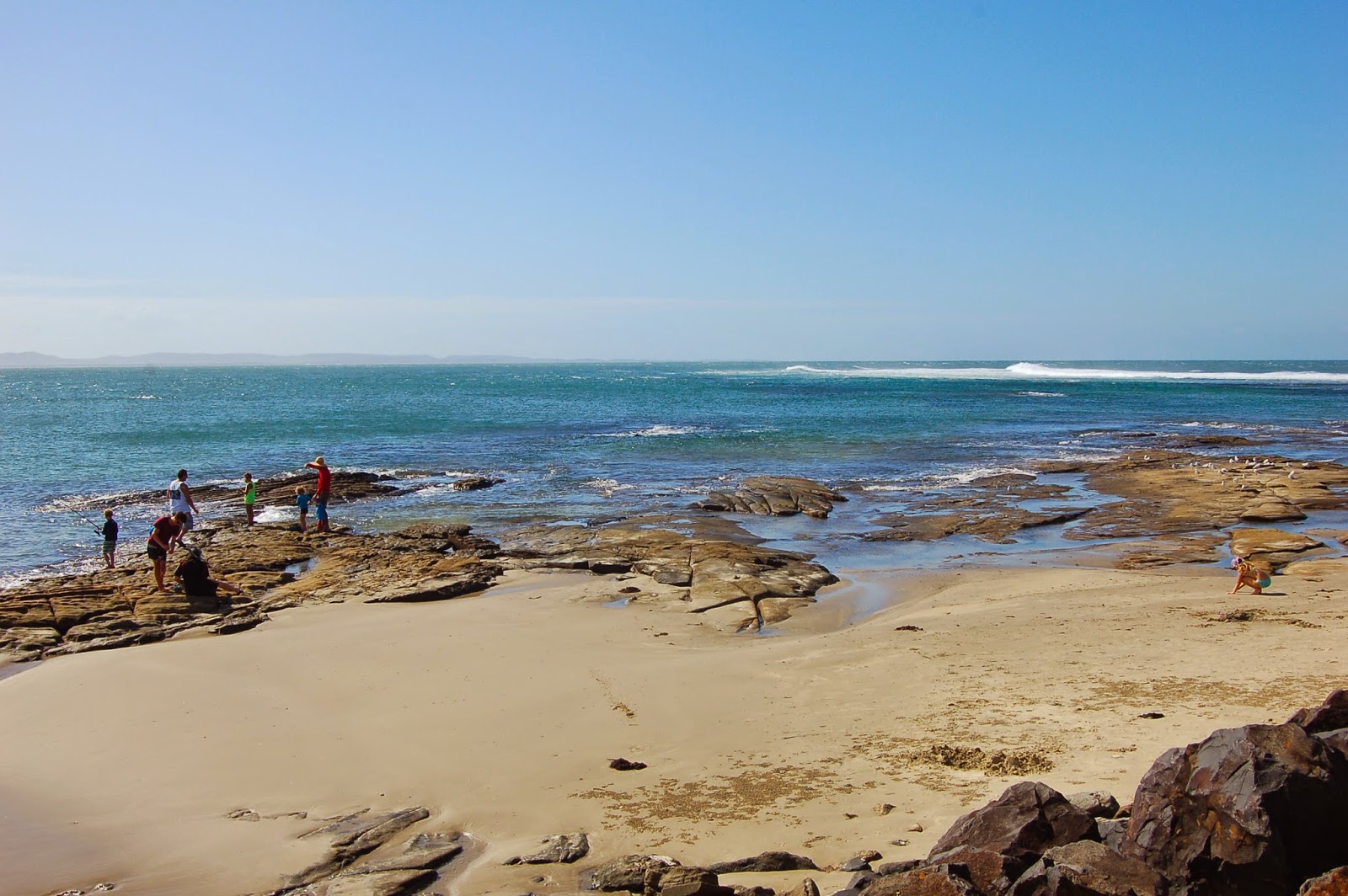 Fishing from the rocks, catching lots of seaweed... 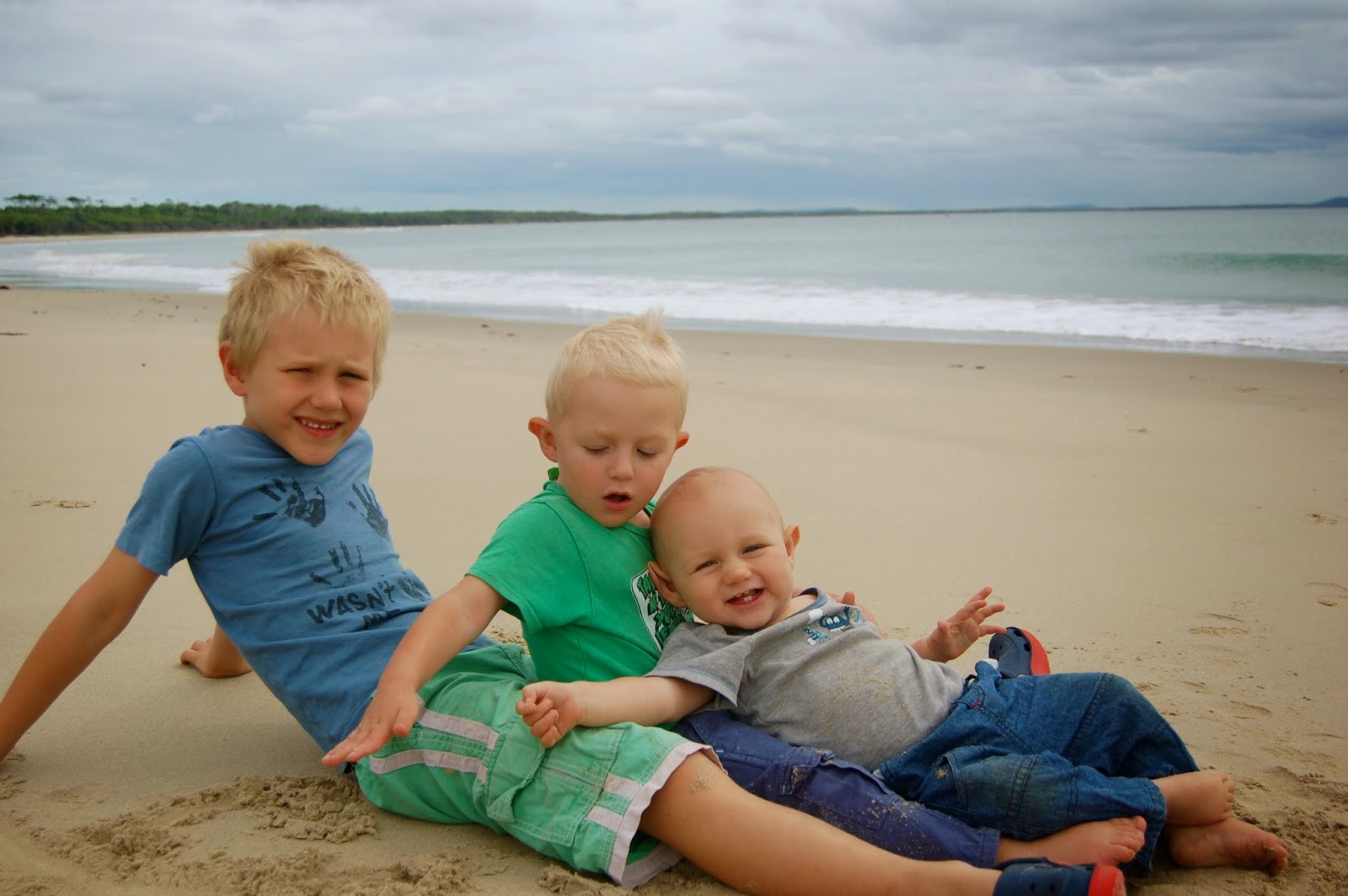 Building sandcastles on Shark Bay. The name ruined all the incentive for a swim... 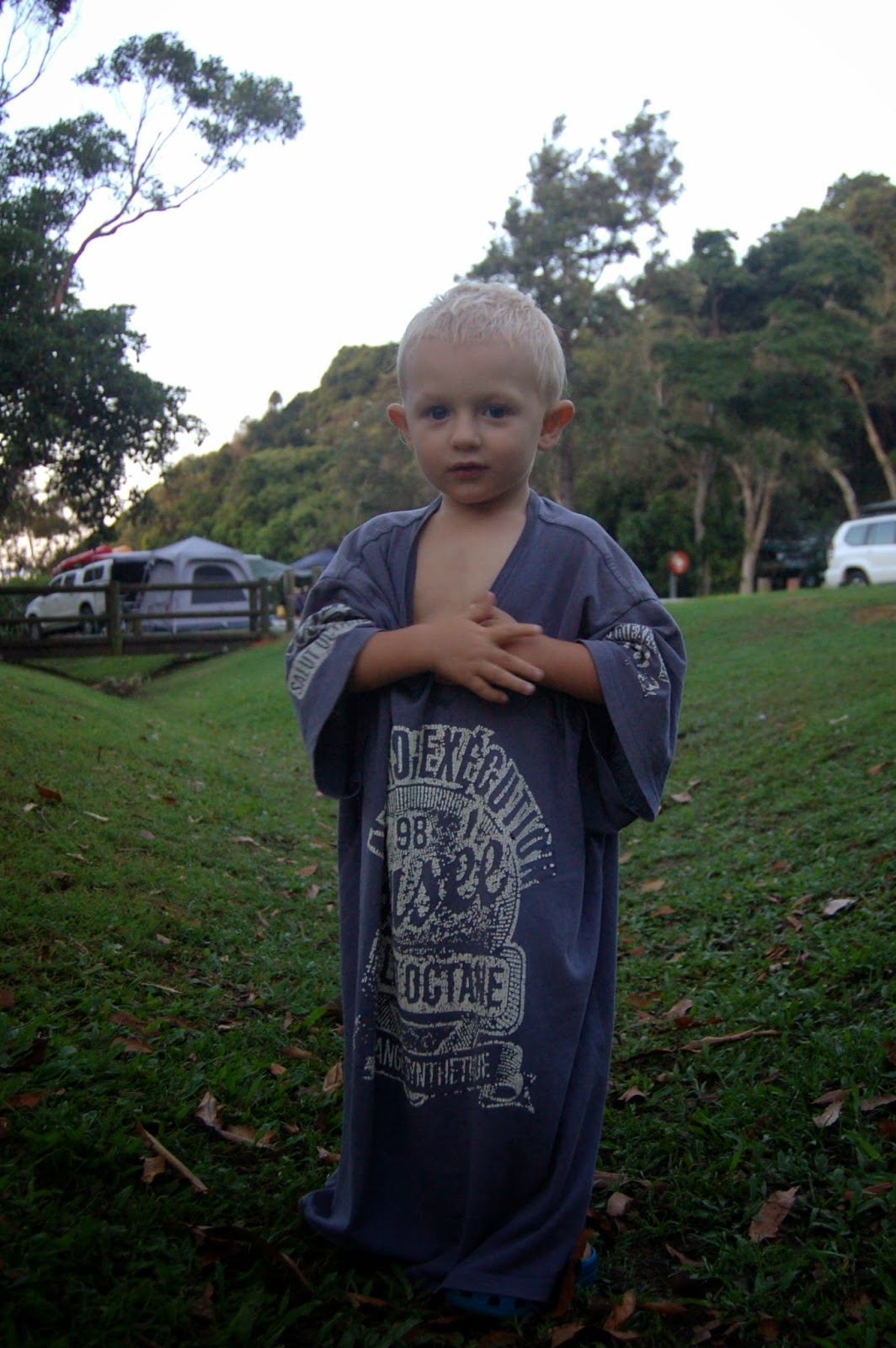 Another wet set of clothes, borrowing Dad’s shirt to get warm again. 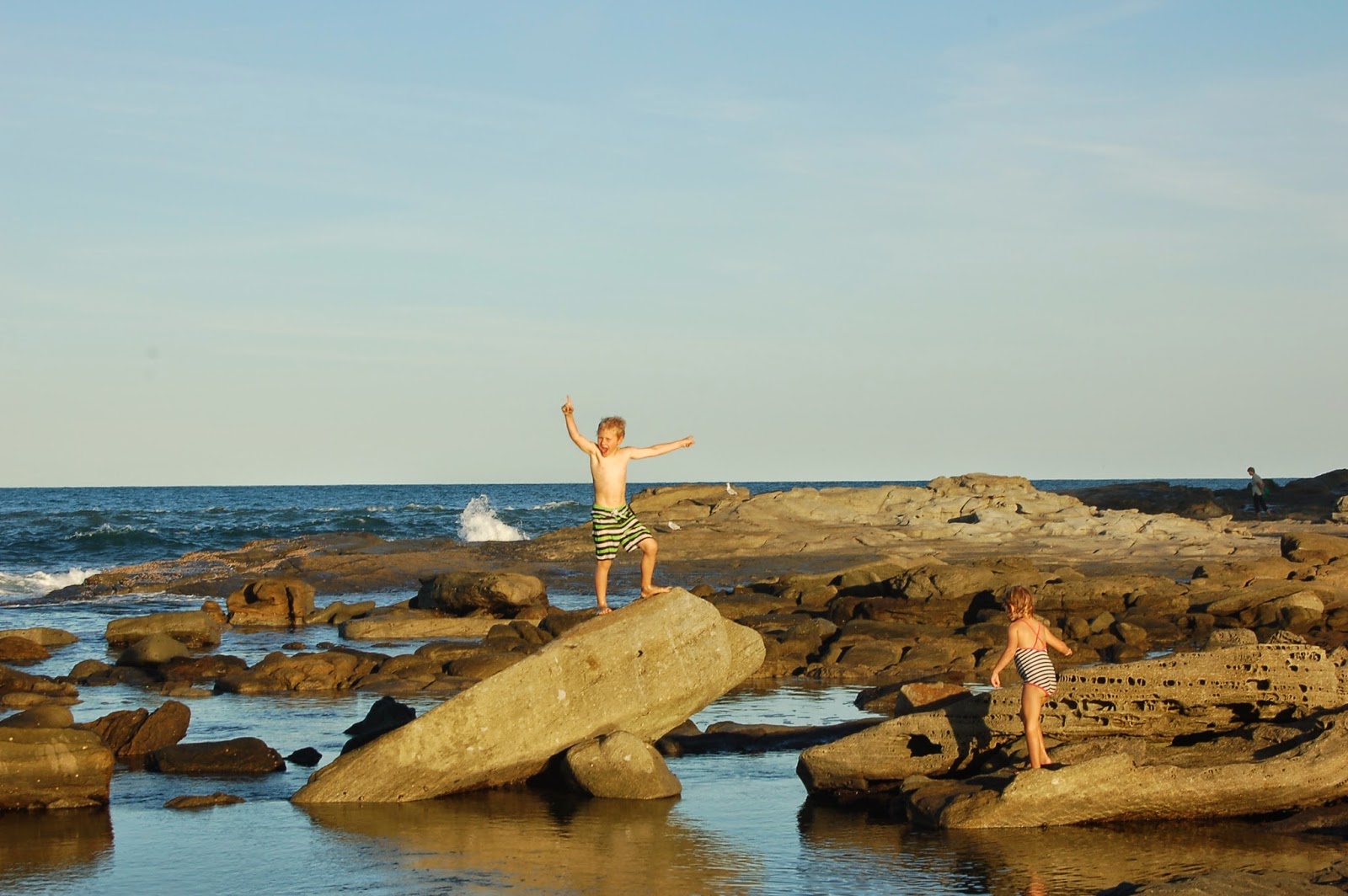 After many days of playing amongst the same rocks, we got to know and name them. The whale (above), Alex’s cooking pot, Sophie’s bath, The Slippery Trench (3 falls!). 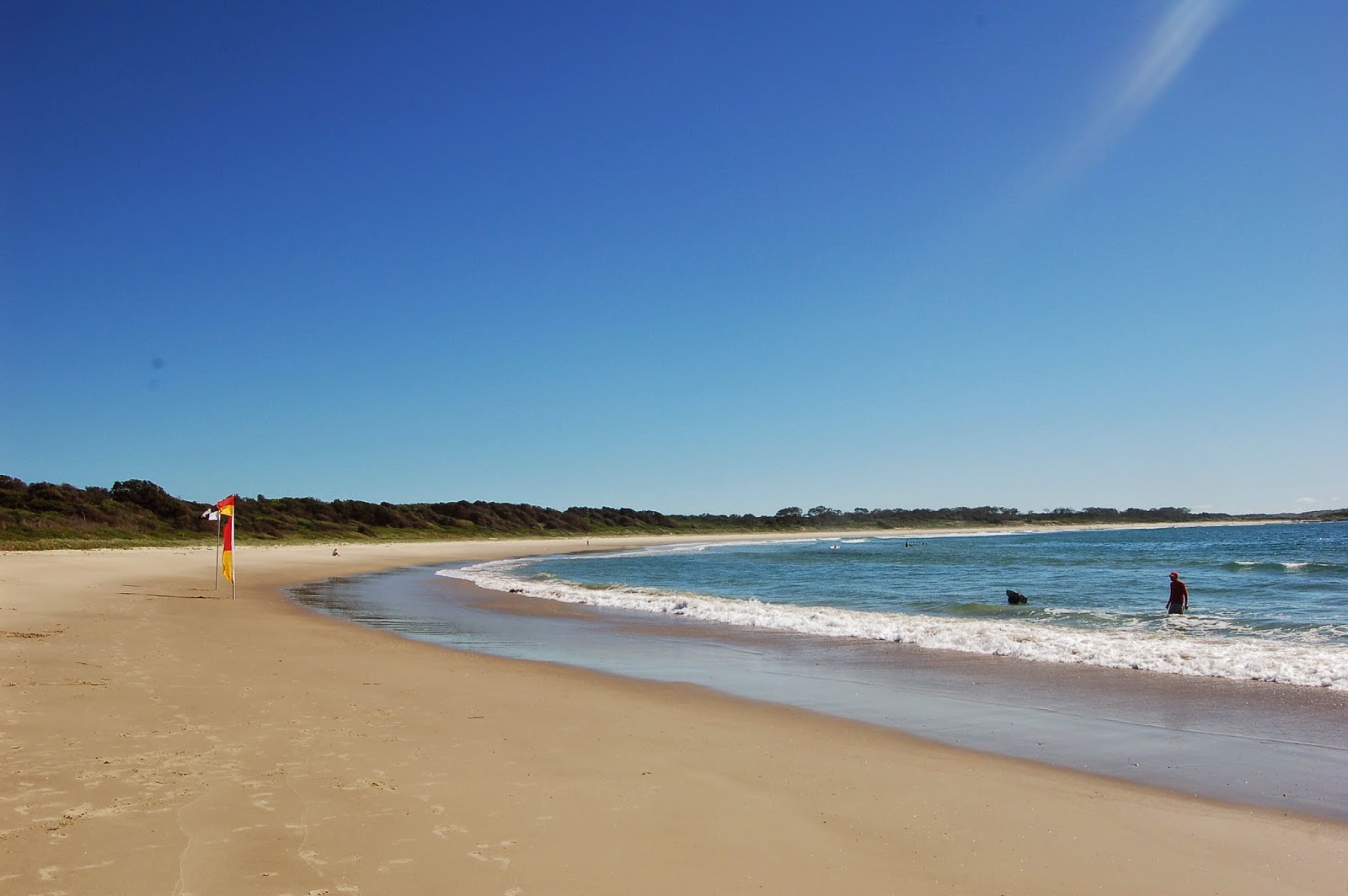 Iluka Bluff Beach, a kids favourite for swimming and bodyboarding. 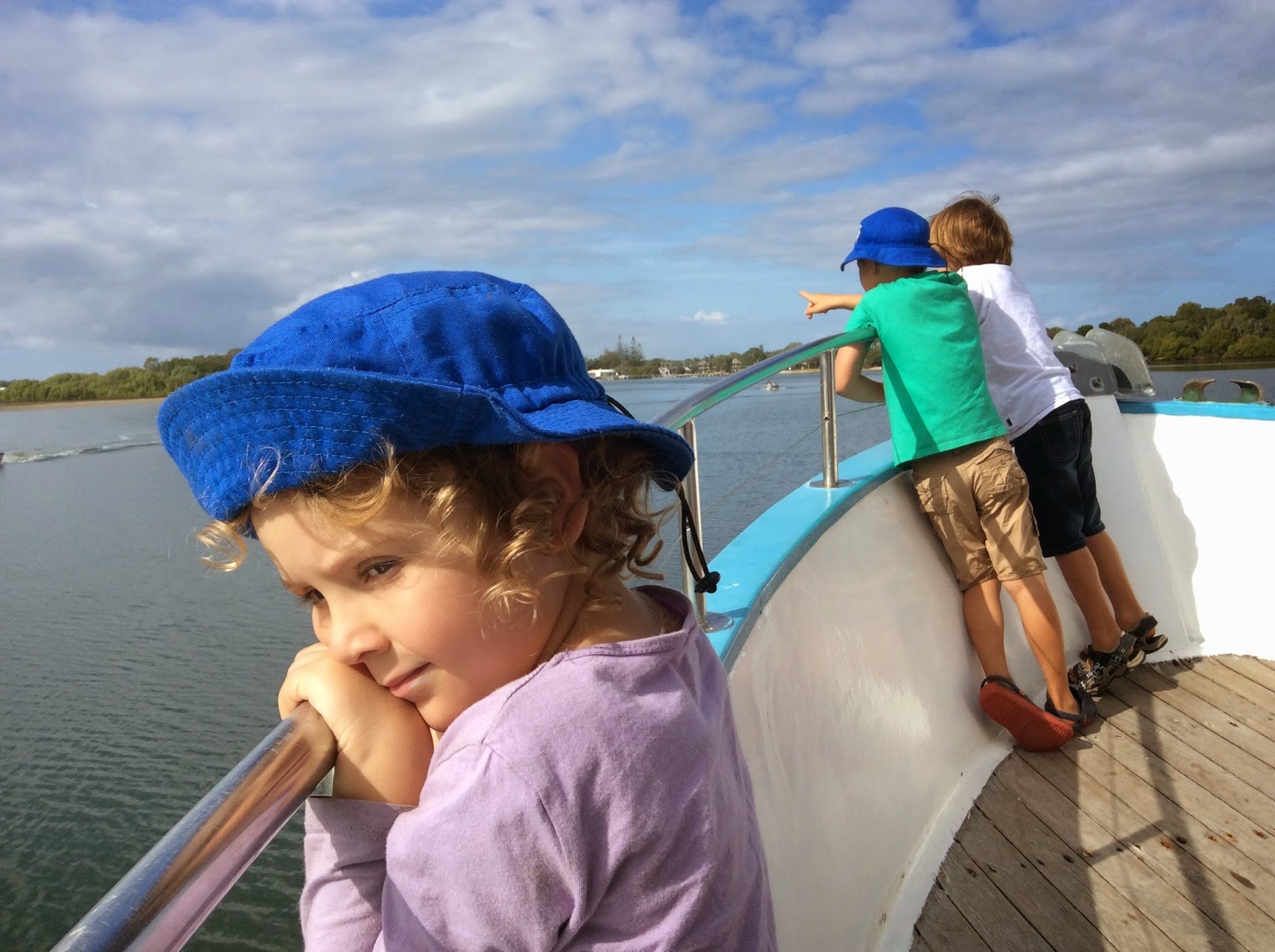 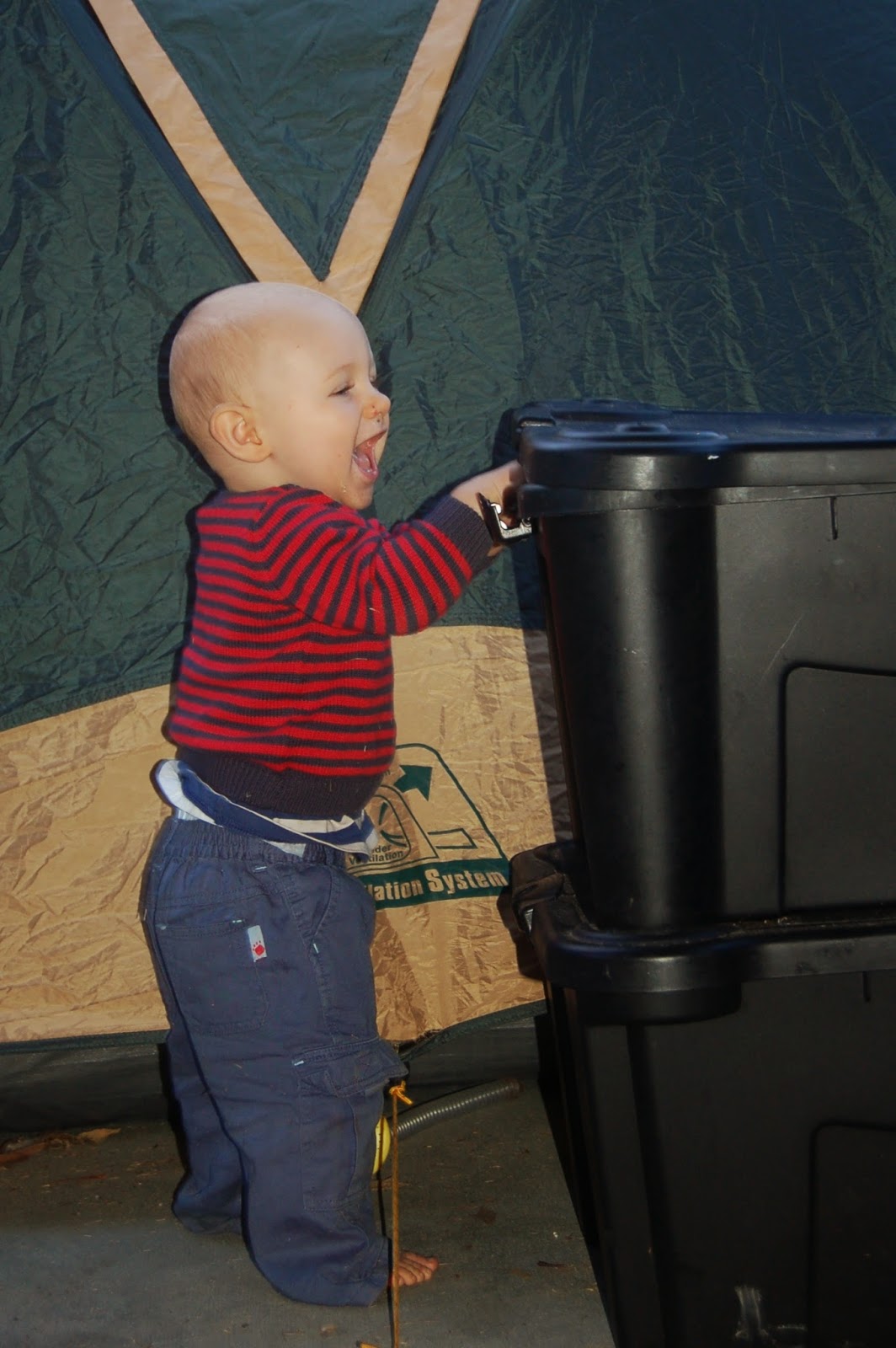 Little David, 9 months old, is growing up so quick, teeth number 7&8 are a fact.

Cooking was quick and interesting to say the least. We have a very basic set-up, no fridge. Mornings with fried eggs on bread and mashed banana & cinnamon porridge. After our walk/swim on one of the beaches we would buy some fresh veggies for lunch (salad wraps), fresh fruit for afternoon tea, meat and frozen veggies for dinner. The frozen veggies would keep the meat cold until evening, cheaper (and healthier!) then a bag of ice for the eski...
Every holiday seems to end up with a soundtrack, that song that got played over and over again:
The Banana Boat Song, by Harry Belafonte (1956) was good but the mock version of Stan Freberg (1957) had us all in stitches over and over again.

All rested and ready to go for term 2.
I’ll see you back soon here, once I’ve worked myself through my huge pile of washing.

Email ThisBlogThis!Share to TwitterShare to FacebookShare to Pinterest
Labels: Camping