My pantry from heaven 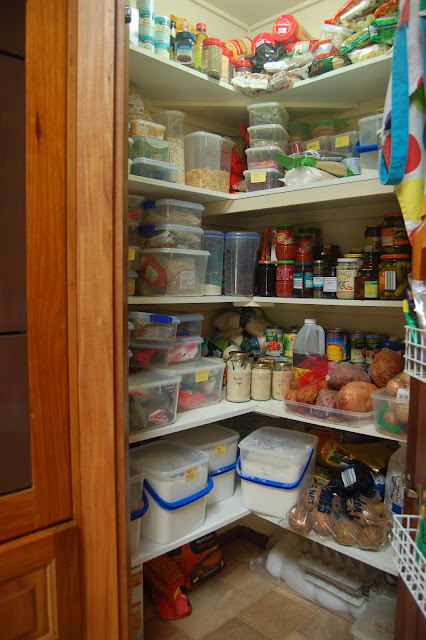 I’ve got a confession to make, I’m in love with my pantry... Just walk in, the light will come on automatically (thanks hubby) and get inspired. The whole house might be messy, the pantry is tidy and organised and most important: pest proof.
Yep that’s four types of flour (wholemeal, rye, plain and bakers) but then I bake at least one bread a day. Ten types of sugar (dark brown, raw, icing, granulated, vanilla and palm sugar and then molasses, golden syrup, maple, honey). Coconut in every form (desiccated, virgin oil, shredded, flaked, milk, cream). Nuts (cashew, pine, macadamia, walnut, hazelnut, peanut) and seeds (sesame, poppy, sunflower, pepitas, linseed). Dried goods (peas, beans, lentils, figs, apricots, cranberries, sultanas). And my shelve of carbohydrates (3 types of rice, couscous, polenta, rolled oats, and dried pasta in every form).
Other very well used ones are the tomato paste, olives and milk powder for making the extra thick yoghurt.
There are a couple of emergency cans (diced tomatoes, kidney beans, peaches, tuna, corn) they are a nice thought while in the flood season.
Instead of filling up further and further it’s starting to slim down, I’ve worked out a bit what actually get’s used instead of what I fancy to use (pearl couscous, wheat germ, cannelloni,...).
What amazes me most when I look at this picture, that it’s filled with basics. There is hardly anything ready made in there. There are two packets of naan bread, but ever since I’ve learned to make them myself I can only look at them with sadness. The same goes for the spice packets for chicken korma and curry. Tortillas are next on “learn how to make list”.
My pantry used to be full of these pre-made foods, to think how long we survived on the “just add water”  (well sort of) kind of packets for dinner... It doesn’t take much more time to make it yourself with “real” foods , not only does it become healthier (no excessive salt, sugar and preservatives, bla bla bla), it’s so much cheaper and the taste is so worth the effort. 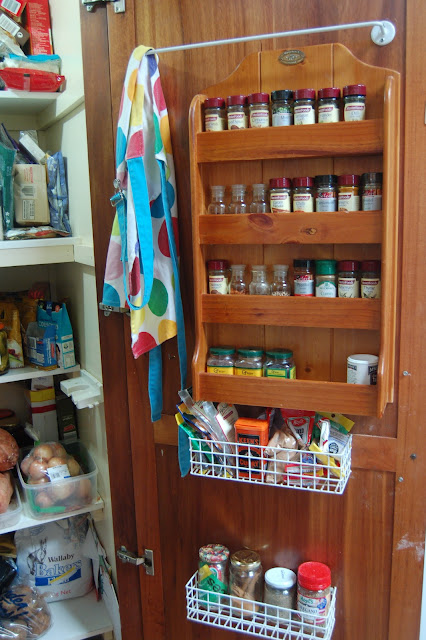 Although my spice rack is another pride, the garden will always be first pick (thyme, oregano, rosemary, parsley, mint, bay, tarragon, sage, chives, chilies, ginger, kaffir lime, lemon grass, basil, coriander). The fresh garlic, ginger, limes and lemons standing guard next to the stove.
I really have to throw out the curry powder, I keep looking at it with disdain. I'm starting to feel like a snob...

Hmmm, while I read this back, I’m starting to feel a little obsessed and might be in need of more hobbies.  Or are there other pantryphiles out there?

Email ThisBlogThis!Share to TwitterShare to FacebookShare to Pinterest
Labels: Pantry