Living in the Tropics

We have been in doubt to write this or not, but it is part of our life here.
Living in the tropics is not only nice beaches and sunshine everyday, it also means tropical animals. So swimming next to all the beautiful turtles, dolphins and whales, there are salties (saltwater crocodiles) and sharks. In Summer time we have nasty stingers (=kwallen) and a rain season that brings floods, mozzies (mosquitoes =muggen) and snakes.

With this new house we have a big tropical garden which backs to bush and mangrove, with that you get wildlife. It is very cute to see the walibies in the garden at the crack of dawn, lots of birds and bush turkeys. But also snakes like the carpet and tree snake, harmless with beautiful patterns. There is a big carpet snake living between the ceiling and the roof, he keeps the rats and possums away. When we go to sleep you can here her waking up and sliding over the ceiling tiles to go out hunting outside, she comes back with the sunrise to have a nap. Her youngest son lives in our small tool shed. We knock before we enter, so we don't give him a fright. And there are colourful tree snakes, they are much smaller and live in the countless trees in our garden. They are harmless and only bite when provoked, just like cats and dogs. Carpet and tree snakes are very territorial and keep poisonous snakes at bay. But because of all the rain we had, lots of people and animals lost their houses. The ants invited themselves and took up temporary residence in our kitchen. And last week Sander saw a snake during daytime wandering through our garden, it was the first awake snake he saw in the garden so Sander ran inside to come back with the camera, for a nice picture. Proudly he showed it to the neighbour but he wasn't to enthusiastic and asked why photographing the snake instead of killing it. This turned out to be a very dangerous snake, the Taipan.
I got so mad when I heard it on coming back. I have always been so terribly scared of snakes. When we just moved to Australia I would just start screaming at seeing any snake and start running (and almost crashing myself in a tree while doing that). Now I have seen a couple, I'm still wary of them and keep my distance, but know much more about them, I don't scream anymore and was so proud of myself because of it. But having a extremely poisonous snake wandering through my precious garden, it broke my hart. How can work in the garden with Tim next to me?

Last Sunday we had some friends over, real bushies. We were walking through the garden and admiring all the beautiful tropical flowers when Sander saw him again. Just: "snake, there" is what he said, it was the same one he spotted before. Before we knew it, our friends had their hands on the Dutch hoe (=schoffel) and spade standing next to us and the snake had a terrible headache.
I still go outside to work in the garden. I just make lots of noise so they hear me come and they can leave. For now, I keep Tim inside. The rain season is coming to it's end and with that the snakes can go back to their houses in the bush. Even when all the weeds are gone, I keep the Dutch hoe close by, just in case... 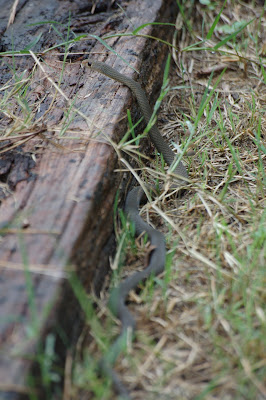 Chances of getting bitten by a snake are very small, getting bitten by a poisonous snake are even smaller. There is a bigger chance of getting hit by lightning and how often do you hear about that? Even bee stings have a higher casualty rate and don't even start about traffic.
If something would happen, bandage above the bite and get help. There is anti venom and medical assistance available in the Sarina Hospital only 14km from where we live. But most important of all, just don't provoke them like this fellow did...: http://www.mid-day.com/opinion/2009/jan/260109-Gordon-Lyons-Arm-amputated-snake-bites-9-times-Sydney-Khalidoscope-Royal-Darwin-Hospital.htm

Email ThisBlogThis!Share to TwitterShare to FacebookShare to Pinterest
Labels: Wildlife