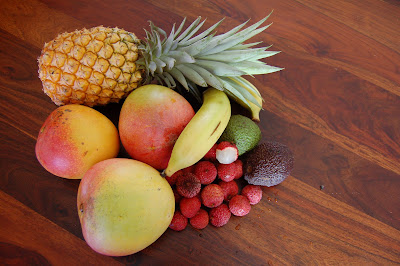 It might be freezing cold in The Netherlands, down here it's still Summer.
Hot and rainseason, great for your skin because you end up in a life size Turkish steambath. So far we only had one cyclone building up and only small floods, we'll see what the next month will bring us...
These hot Summers come with the best fruits: mango, lychee, avocado, banana and pineapple (although the last two grow all year round), so do you here anyone complain? I don't think so! We buy the fruits at local stalls along the road, so none of the fruits had to travel more then 5km. 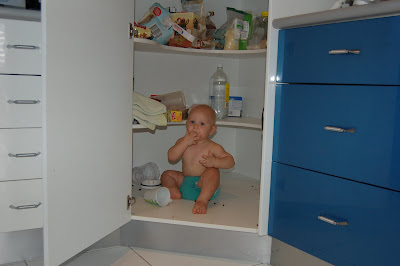 It's time for Tim to start saying goodbye to his favorite place in the house: the kitchen storage cubboard. It's almost empty now, so not that much fun anyway...
The owners of our house want to move back in, so it's time to move again. We're getting better at it every time, apart from the furniture with every move we have less and less stuff. We have been seriously downsizing. A lot of our books are stored in the public library for everybody to enjoy and all our CD's are digital, we only have the clothes left that we actually wear and the cubboards in the kitchen are filled with things we use. It makes life much easier.
Friends of us will be working inlands for two years, so we're going to look after their house while they are away. The house is much smaller and older then the houses we've been living in so far, but much cosier.
Our friends have been doing quite some renovations on it, we have been giving them a hand the last couple of weeks to get everything done before they move out. Today we finalise the plastering of the inside walls and we're done. Just in time, because they move out tomorrow. I'll start painting those walls the day after so we can move in on Friday. We'll put some piccies on when we're done unpacking. The house is about 2km from where we live now.
Our new address:
89 Westcott Avenue
Campwin Beach, QLD 4737
Australia