Making the most of the seasons

The middle of Winter, we're so lucky to live in a area where we can harvest fruit and veg all through the year. At the moment it's strawberries, apples and citrus fruits. The last two are starting to come to an end, I'll miss them. We don't have a cellar or a big enough fridge to keep to store them for the rest of the year.

We're going through kilo's of apples (a week!) at the moment, they come from a farm in the mountains, so nice and crispy, a real treat, dirt cheap in the middle of the season, but they won't be around for much longer. Something to remember them by: Apple Jelly. 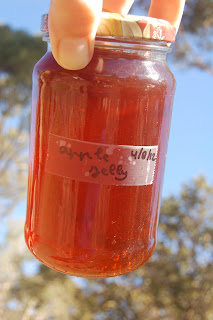 And you know what, my jelly did actually set this time. Many of my attempts at making jam and jellies has turned out to be quite runny. Nobody complaining, it's a real treat stirred through yoghurt, or as a sauce on saturday morning pancakes. But it becomes a matter of pride...
Jelly only uses the water you cook the fruit in, with the addition of sugar and lemon juice and prolonged boiling it turns into a jelly.
Prolonged boiling being the key word, don't look at the expected boiling time, don't stop boiling until it has actually set...

But... I felt like I was wasting the real fruit. So I've sieved the lot and ended up with very nice apple sauce. But why eat apple sauce if you can munch on a real apple?
More googling, granola, the not so sweet and fatty kind, instead of adding almost a cup of oil you add a cup of applesauce and end up with the same end result.
Had to give that a try right, everything in the name of research. Fantastic granola, I've used a nice mixture of nuts, rice syrup is not something I had, but maple syrup or honey does the same. (granola recipe link). I put two more cups of apple sauce in the freezer to make sure I can make it again. 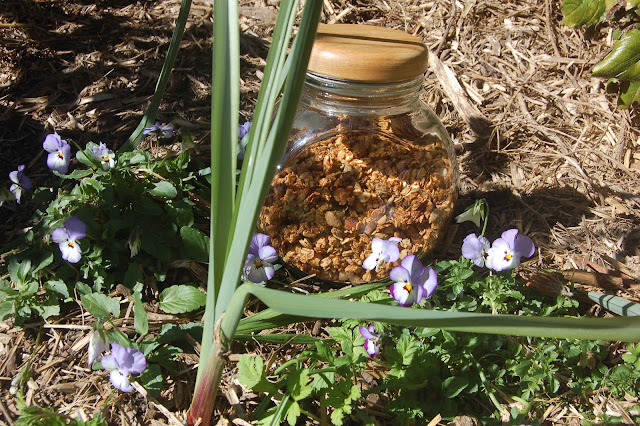 My neighbour told me he had a bumper crop on the trees, more then they can possible eat. I told him I was making a batch of ginger & whiskey marmalade, he started to drool, we made a deal.

I was instructed to come along with a couple of buckets. We did. Two shopping bags of macadamia nuts and two filled with lemons, mandarines, tangelo's, blood oranges,.. The kitchen is smelling divinely citrusy at the moment. I'll use some for preserving, the rest will get eaten and juiced.

But then, that marmalade almost did me in, I followed the recipe to the dot. But after hours and hours of bubbling away it did not set. By then I was getting pretty over it, I had a lot of other jobs I wanted/needed to do that day and here I was standing above a pan stirring the day away. Half a sachet of jam setter in a final attempt, it looked like it had set, I poured it all in sterilised jars and gave it all a canning bath. The next day I tried some. Runny!!! ARGH!!!!

A small batch I might have left it, but 10 jars of orange syrup? Also, a promise is a promise and it better be good.
Back in the pot, more hours of bubbling, more jam setter, sterilise all the jars again.
It's still a little thin, but much better. I'll drop some of shortly.

But let me tell you, I'm done canning for a while. Spend a lot of the last weeks cooking, the freezer is full, so is the pantry, let's focus on some other things for a while.
The garden can do with some Spring preparations and I really should finish a couple of my sewing projects.